The Art Of Injecting Fun Into Your Business.

Lighten Up And Have Some Fun In Your Business.
It Might Just Make You A Fortune.

That’s what the machine-gun toting border patrol agent demanded to know as he inspected the contents of my friend David’s trunk. He had accidentally left the case of fancy cigarette lighters in there; he had been giving them away as gifts to customers, and simply forgot to take them out before driving into Reynosa, Mexico to visit his manufacturing facility.

He had crossed this border hundreds of times, and knew a non-subtle bribe request was forthcoming. Instead of waiting, he suggested a demonstration:

“These are special lighters,” David offered, as he plucked a box from the case and handed it to the agent. “The flame on them is huge—like ten or twelve inches high. Go ahead, try it.”

The border patrol agent let his weapon rest on the shoulder strap as he grabbed the box from David, opened it and poured out the silver lighter into his right hand, eyed it momentarily, then flicked it with thumb.

Suddenly, without warning, the border patrol agent screamed out in pain, slammed the lighter on the ground, and looked bug-eyed at David, wondering what had just happened.

The gringo, it turns out, had just punked him.

The other agents—five or six of them—hurried over, guns drawn, to see what had happened. When they figured out their amigo had just screamed like a little girl because he’d been intentionally shocked with a novelty cigarette lighter, they laughed so hard they cried. They picked the lighter up and passed it around, one by one, to see how bad the shock actually hurt when activated. Instead of being shot or thrown in Mexican prison, David earned six new best friends. He gifted each of the agents their own shocking cigarette lighter, and was sent happily on his way.

No, I’m not recommending that you subject yourself to the possibility of execution by firing squad.

But I am recommending that you take a page out of David’s book and lighten up a little. Quit taking your business so seriously—experiment with having some fun. Fun, it turns out, can be very profitable.

David doesn’t normally shock border patrol agents. But he regularly shocks receptionists, purchasing agents, and CEOs of major corporations that he’s trying to win business from. After the initial… well, shock… the offended person realizes that they can use the exact same lighter to have some fun with some of their coworkers, family, and friends. Even more fun!

This is the same David who installed massive twelve-foot high speakers into his Texas manufacturing facility so he can blare loud music when his workers have to drop everything and work on otherwise-tedious-and-stressful emergency rush orders. He’s the same guy who put punching bags and pool tables his offices. And who outfitted his entire office staff with baseball jerseys on Fridays. And gives fake lottery tickets out as Christmas gifts. And rigs his online contests so that his favorite customers always seem to win gift cards. And hands out boxes of fireworks, Snuggies, seventy-pound boxes of pennies, and giant Hershey bars to customers and prospects.

And it’s not like he’s running a clown carnival, either. It’s just that he looks for ways to make his customers and employees smile. Not all the time—but enough to keep them engaged and excited.

To get the job done, your fun doesn’t have to be silly, obnoxious, or stupid. It just has to be fun. But since business culture is normally so UN-fun, I acknowledge that the entire idea of fun in business might make you squeamish, and you might need a little convincing.

So start by just reading and thinking about this article… then slowly, cautiously, inject a little fun into your business. I’ve got plenty of ideas for you, so let’s go!

First, let me help you understand WHY fun works; then I’ll come back and give you some ideas. There are three major reasons:

1) Fun Is Unexpected: The fact that all your competitors are stuffy, buttoned-downed wet blankets makes any meager attempt at fun highly noticeable by contrast. Ever sit on one of those Southwest Airlines flights where the flight attendant raps the safety briefing? It’s hilarious, and it’s refreshing. And everyone loves it.

2) Fun Can Put People In Highly Emotional—And Bonding—States: Even if your fun stuff shocks (literally) or offends, it can still be effective. When people experience something unexpected, surprising, and even mildly dangerous, their bodies release hormones that bathes the brain in neurotransmitters called dopamine and norepinephrine, which are associated respectively with pleasure, pain and emotional response, and with alertness and arousal. In layman’s terms, people are attracted to you. Go with that.

3) Fun Is, Well… Fun: That seems pretty obvious, but the fact is people like fun. One of the six “weapons of influence” as discussed in Influence, The Power of Persuasion (Robert Cialdini) is Liking. If people think you’re fun, they’re going to like you. And if they like you, they’re going to be more likely to want to do business with you. Simple enough.

Enough of the science lesson. How do you actually pull it off?

One way is to look for parts or pieces of your business that are normally boring/mundane/routine and bring them to life in a fun and energizing way.

You can create a video for just about anything:

It could also be as simple as branding your company with the color hot pink: invoices, job signs, business cards, tools, trucks, advertisements, etc.

Or giving stuff away at random and seemingly unexpected times, like David does. Consider allocating some of your contractor marketing budgets into gifts.

If you ship stuff to people, you might want to include something fun in the package along with the regular order. Suckers, M & M’s, Justin Bieber dolls, whatever.

What about fun advertisements—here’s one: 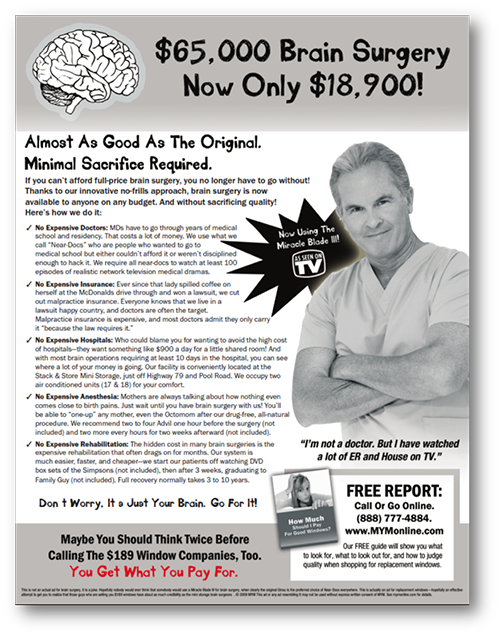 And finally, a few business-specific ideas:

The key is to have fun. It’s just that easy.

Offer: Professional Explainer Video For Half Price: Since we are just starting in the explainer video business, we need to build our library of examples. If you’re willing to be a guinea pig, we’re willing to give you a heck of a deal.Normally we charge $4,000 for a 3 minute video ($3,000 for Monopolize Your Marketplace Insider Members), but we are going to do the first 10 videos for half price. This includes full IDENTITY discovery, script writing, custom drawings, voiceover, and animation. Everything. And the final product is 100% guaranteed—so if everything goes wrong and you hate it (not likely!), you get a full refund. Turnaround time is about 1 month, so contact us now—use the form below, or call (817) 385-6125.